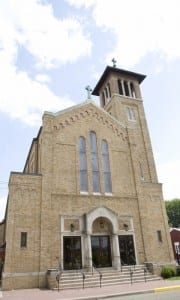 A History of St. Francis Xavier Church in Moundsville

Compiled by Father Samuel Sacus for The History of Marshall County, West Virginia (1984)

The Holy Sacrifice of the Mass was celebrated in Moundsville as early as 1848. Frs. Brazil and O’Neal were among the first to administer to the spiritual needs of the scattered flock of Moundsville and surrounding missions. Mass was conducted occasionally at the residence of Major Phillip Barry and also at the home of Hugh McGuire. Fr. James Cunningham at first visited Moundsville several times a year, holding services in a storeroom in the west end of the city. With the approval of Bishop Vincent Whelan, he proceeded with the construction of the first St. Francis Xavier Church {near the Ohio River} in about 1854. Bishop Whelan dedicated the church in 1856.

St. Francis Xavier Parish was established in 1857 with Reverend James Cunningham as the first pastor. It became a mission of Wheeling from 1858 to 1863 when Rev. Edward Delahunty was appointed pastor. He was succeeded by Rev. Daniel Collins in 1869. The parish returned as a mission of Wheeling again from 1872 until 1882 when Rev. J. P. Daly became pastor. He was succeeded by Rev. A. Boutlou in 1884.

Rev. John McBride became pastor January 1900, and served until July 1909. Rev. A. Catania served the parish for several months until the appointment of Rev. Francis Flanagan in 1910. During Fr. Flanagan’s pastorate, the present church, more centrally located, was built. Fr. Flanagan died unexpectedly a few weeks after the new church opened. He was succeeded by Rev. Michael J. Coghlan on Easter Sunday, 1918.

During Fr. Coghlan’s pastorate, the parochial school, opened in September 1921, in the charge of the Sisters of St. Joseph and with an enrollment of 200 children. {The Sisters of St. Joseph were founded by Irish nun Sister Mary McKillop to serve as missionaries and teachers of the poor.} Father Coghlan died in May 1950, just a few months after receiving the honor and title of monsignor. He was succeeded by the Very Rev. Benjamin F. Farrell, June 1, 1950.

During his pastorate at St. Francis, Fr. Farrell also received the honor and title of monsignor. Fr. Farrell served the parish until October 1973, when he was succeeded by Rev. Paul Hickey. Rev. Patsy Iaquinta became Associate Pastor in 1974.

Having himself received the honor and title of monsignor, The Very Rev. Father Samuel Sacus, former pastor of St. Francis Xavier Parish, continues to serve as pastor at St. Francis De Sales Parish in Beckley, West Virginia. Father Sacus was transferred from St. Francis in 1986.

This began the period of stewardship by Third Order Regular Franciscans. The first Franciscan pastor was Rev. Joseph Glancy, T.O.R. He was a Navy veteran and a former missionary to South America and served St. Francis from 1986 to 1991. During his pastorate, Fr. Glancy undertook the construction of Xavier Hall.

In 1991, Rev. Ronan Deegan, T.O.R., succeeded Fr. Glancy. Also a Navy veteran, Fr. Ronan grew up in nearby Benwood, West Virginia. He was well acquainted with Msgr. Benjamin Farrell and as a youth sang in a choir directed by the Monsignor. Fr. Ronan directed the construction of new church offices and the complete renovation of St. Francis Xavier Church, which brought it to the beautiful state in which it exists today. During their years at St. Francis, Frs. Joe and Ronan were served by assistant pastors Rev. Terry Adams, T.O.R., and Rev. Albert Driesch, T.O.R.

Rev. Ed Stafford, T.O.R served St. Francis from 2009 until 2012. Sadly, during his pastorate, St. Francis Xavier School was closed after almost one hundred years of operation.

Our latest Franciscan pastor was also the first from the Asian Sub-Continent of India, Rev. Ranjan Ecca, T.O.R. Fr. Ranjan served from 2012 until 2014 when he returned to his home in India. Rev. Raju Antony, who also hails from India, served as associate pastor during this time and became administrator at St .Jude Parish in Glen Dale, West Virginia after Fr. Ecca’s departure.

From September 2014, to the present, Diocesan Priest Father That Son Ngoc Nguyen has served as pastor of St. Francis. Fr. That Son, who was born in Viet Nam, emigrated with his family to the United States, where he lived for some time in Marshall County, West Virginia before entering the priesthood. Fr. That Son’s energy and enthusiasm portend a positive future for St. Francis Xavier Church. His creativity and strong sense of tradition inspire fellowship and service to the parish.